Online Optical Illusion Based on Size 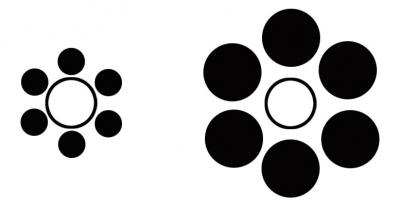 In this online optical illusion, black circles of smaller sizes surround one white circle while bigger black circles surround another circle. When we look at this online optical illusion, the white circle surrounded by smaller back circles looks bigger than the circle surrounded by bigger black circles. But, are you sure that the size of these white circles are different? You will be surprised to know that these circles are actually same in size. Is it hard to believe? Then, draw a diameter of each of these circles and measure the length. You will find that your eyes are deceiving you. The truth is they are the same size.

The same effect holds true in other geometrical figures as well.

Figure 2 shows an online optical illusion with two vertical lines of same size. However, when you look at this image, your brain perceives the vertical line on the right to be longer. It is due to the smaller space within the two horizontal lines as compared to that of the vertical line in the left.

This Psychological Article on Online Optical Illusions is part of Boomer Yearbook’s continuing series of out of the ordinary suggestions on how to alleviate elderly problems and keep our brains young. We believe knowledge is power. We’d love to hear what you think.